The Pictionary Game Is Back, And Ready For The Digital Generation

If you grew up in the eighties, the Pictionary game is likely to bring back fond memories of your childhood.

Thankfully, the rise of the internet has shed light on what once were popular games. The result is a grand comeback of popular games like Pictionary. The great news is that the premise of the game is clearly timeless and new players have taken to the joy that it brings them.

The premise of Pictionary is simple enough that children can play. But at the same time, it can challenge adults as well. This differentiation in challenge levels is what makes it fun and versatile. Plus, if you like guessing and being animated, then you are sure to love Pictionary.

In a classic game of charades, players act out a word or phrase. Their fellow team members then have to guess what the phrase being acted out is. In Pictionary, players rely on drawing instead of their acting.

Naturally, the first thing you need to play Pictionary is the board. The game, which can be purchased at Walmart, includes two erasable makers, erasable boards for drawing and an updated category of clues. If you do not live near a Walmart then you can also purchase the game online and sever other retailers. Black Friday is another great time to purchase the game as it often gets discounted deeply.

With the rise of Pictionary, you will find that there are several different editions you can play. While many people, especially the seasoned players, enjoy the new additions, many others swear by the classical game. 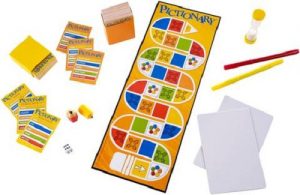 According to Hasbro, the maker of Pictionary, the rules of the game are as follows.

1. Each team places their game piece on the starting square of the board. Teams choose who will be their first person on their team to do the drawing.

2. Each team rolls the die. Whoever gets the highest number chooses the first card.

3. The start square is an “all play” square. This means that on the first turn (and any other “all play” squares that are encountered on the board) all teams play at the same time. Each team has their chosen “picturist” look at the same category card for five seconds. After each picturist has examined the card, the timer is set for sixty seconds and each picturist must sketch their card.

📌NOTE: Letters and numbers cannot be used in sketches. Verbal and physical communication is also prohibited.

Of course, with every game, there is such a thing as “house rules”. This is where your group of players tweaks the rules just a little so that they can meet your needs. With any house rules, however, be sure that you go over them with players before you get started so that everyone is on the same page.

The perfect family board game is one that can be played each time with fewer pieces. ~Robert Brault, rbrault.blogspot.com

4. The first team to make a correct guess gets to roll the die. They then advance their game piece forward that number of squares. Another category card is then drawn. A new picturist from that team must draw the item on the card that corresponds to the color of the square their token currently occupies on the board. Assuming this is not another “all play” square, only the picturist for the team whose turn it is will draw. Likewise, only that team will guess. The picturist again gets five seconds to examine the card. Then the timer is set for another sixty seconds and the drawing begins again. The sketching and guessing continues until either someone guesses correctly or the time is up.

5. If the team guesses correctly, they roll the die, advance their game piece accordingly, and select another category card, following the same process as explained above. Each team must rotate through their players, choosing a new picturist each time they sketch.

The first team to land on the finish square and correctly guess the sketch, even if it is on another team’s “all play” square, wins the game.

As previously mentioned, Pictionary is a variation of the game Charades. This game can be traced back to the 18th century. The first edition of the modern board game hit the market in 1987. By 1988 it had sold three million copies. 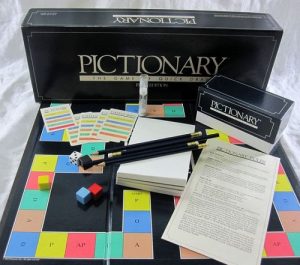 The Pictionary board game, created by Robert Angel, wasn’t enough. In 1989 a children’s game show was created, which aired for 65 episodes. In 1997, the show was given a second shot. Sadly, the reboot of the game show only lasted one season.

Now, the Pictionary game has bee reinvented for the digital generation. You can play Pictionary at home or on the go via mobile apps for both Android and Apple devices.

How to Make Your Own Pictionary Game

If you don’t want to buy the standard Pictionary game but are still want to play, you can easily make your own. All you really need is something to draw on and a list of words for teams to choose from. Word lists for Pictionary are readily available online. Although the official game may seem complicated at first, you can simplify it as much as you please when you go with the do-it-yourself option.

Pictionary is the perfect way to enjoy a little nostalgia and spice up your next party or family fun night. So grab a pen and a timer, and get to drawing.

For more information on how to play Pictionary, check out the video below.