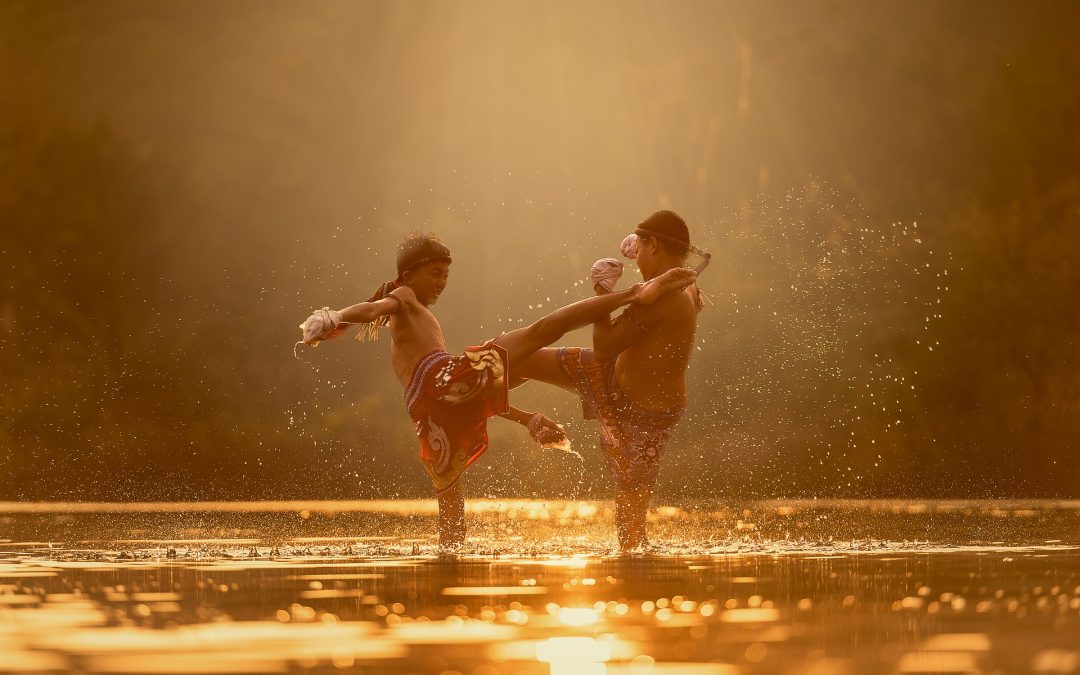 The martial arts are a great way to introduce kids to a fitness routine, respectful socialization, goals, and of course, self-defense. When considering martial arts for your kid, there are many aspects to bear in mind. “Martial arts” is a broad term covering a wide array of practices and styles of discipline. Some forms of martial arts are considered “safer” than others. After thorough review of what is available, we compiled our top 10 best martial arts for kids list to help guide you.

What Are Martial Arts?

While many martial arts appear to stem from Japan, the oldest evidences of martial arts originate from Spain and China. It is a popular form of combat, particularly for self-defense. Trainings often include not only physical components but also philosophical and sometimes spiritual teachings as well.

Martial arts are not only a benefit for learning self-defense. They also provide an incredible development for the capacity of physical and mental strength your kid can carry throughout the rest of his or her life. Within the right martial arts discipline, children can learn respect, coordination, self-esteem, self-control, and how to handle bullying. When reviewing each martial art, consider not only the techniques and philosophy but also the instruction style taught at the school. Observing several of the instructors and determining if your kid would do well under their guidance is important for your kid’s success. Traditional aikido is a noncompetitive martial art. It focuses on defensive moves that protects both the practitioner and the attacker from injury. It is very similar to jujitsu in its techniques, including redirection of the opponent’s energy. Throws are the primary defense technique. Grabs and strikes are taught so students can practice defense with a partner. This is a great choice for learning cooperation with others. Practitioners also learn multi-attack defense and weapons trainings. Some modern styles that involve competitions emphasize more striking techniques than traditional. The recommended age to begin is 6. While it may not be as easy to find a studio in the United States as it karate, capoeira is a great choice for kids who are motivated by music and dance. It’s fluid energy and incredible acrobatic moves will keep your kid’s heart pumping. Full of fun and festive-like energy, Capoeira is the perfect match for those who have an exuberant amount of energy to expend. Depending on the school, kids can begin as early as age 3. Taekwondo is one of the most popular forms of martial arts in the United States. Combinations of foot and hand techniques are learned as defensive and counter-attack measures. They also focus on developing agility and speed using the principle thought that speed is more important than size. Kids can have the opportunity to participate in tournaments, earn belts, and it is an Olympic sport. Full contact is required in the Olympic sparring. Only light contact is made during point sparring. Depending on the school, kids can start as early as age 3; however, the recommended starting age is 6. Tai Chi is used for its many applications, especially with the health benefits a practitioner can gain from the meditation, balancing, stretching, and slow and repetitive movements that are part of the art’s practice. There are many variations of styles, including ones with faster movement. Emphasis is on breathing deeply and meditating. It involves both light and full contact and can involve weapon training (kids practice with foam-like material). Most tai chi schools do not offer practitioners a belt ranking system. The recommended age to begin is age 6. Judo is a competitive sport, but unlike many other martial arts, punching and kicking are not allowed. Kids work with a partner and concentrate on honing their skills with timing and defense techniques. They learn how to efficiently use energy, their own and their opponent’s, and concentrate efforts on takedown techniques. The basic moves practiced are grappling and wrestling. The best age to begin Judo is 4; however, kids under the age of 8 are not allowed to compete. Kung Fu is one of the oldest forms of martial arts. The word is used to describe all forms of Chinese martial arts, which equates to hundreds of styles. When you think of Kung Fu, think of Jackie Chan or early Bruce Lee. In general, Kung Fu is demanding, precise, and requires quick-striking movements. Traditionally, the movements mimic the movements of animals. You can get a great aerobic workout; however, the movements are not as tough on the joints as other styles (e.g. karate) due to its fluidity. Focus is on restraint, balance, and humility. The recommended age to begin Kung Fu is 7. Jujitsu is a competitive martial art that focuses on defensive moves involving redirecting the opponent’s strength back to the opponent. Primary movements include wrestling and grappling. Students work with a partner to learn and hone their techniques. Like most martial arts, they can learn balance and flexibility. Respect toward their opponents is also an important part of the philosophy. The recommended age to begin Jujitsu is 6. Karate focuses on self-defense, emphasizing effective blocks from attacking opponents. Quick-striking movements are essential, using different strikes with the hands (e.g. palm, knife-hands), feet, elbows, and knees. Depending on the instructor, joint locks, grappling, and throws are also sometimes taught. Traditionally, karate focuses on the psychological and philosophical teachings, such as leadership, happiness, perseverance, and having a balanced life. Depending on the school, breaking boards may be an integral part of training. Kids can often begin classes at age 4; however, the recommended age to begin this martial art is at least 8. Brazilian jiu-jitsu focuses on defense and ground fighting. It is a combination of Jujitsu and Judo. It is often thought of as a great choice for children because practitioners can learn how to defend themselves from opponents who are larger and stronger than themselves. Just as Judo has a belt-ranking system, so does BJJ; however, they have a degree system distinctive from Judo or other martial arts. For example, it typically takes about 10 years to earn a black belt if the practitioner trains consistently (compared to 5 years for Karate and Judo). The recommended age to begin classes is 8, especially if he or she plans to participate in competitions. Tang Soo Do is a combination of skills from four martial arts styles: Kung Fu, Subak, Shotokan karate, and Taekkyon. Students spar in order to practice their techniques. Complete control of oneself is always expected, even during competition. Sparring contact is considered important for mental preparedness. The recommended starting age is 4.

If you are not concerned about the length of time, then our vote for the best kid’s martial art is Aikido. It teaches the ultimate principle of respect towards others by learning to execute defense moves with both your kid’s and the opponent’s safety in mind. On the other hand, if you want a martial art that includes competition and striking moves, Taekwondo is one of the most popular styles for a reason. There is a lot of criticism concerning the overemphasis on kicking. However, if you find a dojo with instructors who are Korean or were taught by Koreans, you are more likely to find the well-rounded, traditional teachings the martial art should be and not a “McDojo.”